An approach on the scale of the work

Knowledge of the mechanical behaviour of soil bioengineering structures is improving, but it is difficult to draw definitive conclusions due to their variability. Thus, the sizing is essentially empirical and relies on the know-how of the specialists. However, when a hydraulic study of the watercourse is available, the tractive constraint is retained to support the decision. This is a classic parameter for appreciating hydraulic and structural interactions. Feedback has also made it possible to make the link between the tractive stress and resistance of the structures (Lachat B. 1994 ; Schiechtl H. et Stern R. 1996 ; Fischenich C. 2001 ; Venti D., Bazzurro F. et al. 2003 ; Faber R. 2004).

Improvements in sizing methods for soil bioengineering works can thus be made using an empirical approach by comparing the techniques used in the past with the erosive constraints they experienced during floods. At present, tractive stress is the parameter most often used to characterize the resistance of soil bioengineering structures to hydraulic forces. Tractive stress is the tangential force due to the water which is exerted per unit area of the riverbed (or banks), in N/m². However, only a small number of measurements of this parameter have been found in the literature with regard to soil bioengineering works, and the evolution of these values over time (the resistance of structures generally increasing over time) has hardly been studied.

It should be kept in mind that the choices made to calculate these tractive force values ​​generate a degree of uncertainty associated with a series of approximations. It is important to remember that these values ​​are therefore only indicative. The great variety of techniques and a great possibility of variations available for each technique also create uncertainty around certain values. For example, we know that many structures have riprap at the toe of the bank, which logically should strengthen the structure. But the presence or absence of these, as well as their height, are not specified in the literature, which can lead to higher values ​​of tractive stress than what the living part alone could have resisted. Gerstgraser (1998) confirms in his article the strong disparity of values ​​for the same type of structure. In addition, values ​​are often not measured but calculated.

The empirical approach has been used here and involved the collection of observations on the good performance or destruction of structures during major floods. Using this approach, and working on 21 sites in or around the French and Swiss alpine arc, we were able to calculate 51 new tractive force values, including 5 on structures that had broken down. These values, as well as pre-existing ones in the literature, are thus listed in the following figure (Leblois S., Evette A. et al. 2016).

This graph makes it possible to visualize the maximum values of tractive stress calculated for structures more than three years old (from the literature and from Leblois et al., 2016). These are tractive stress values obtained either for a flood that broke the structure, or for a flood that the structure resisted. It is therefore a set of values that restrict the limiting value of the resistance of the technique. Over the first three years, it can be seen that the values found for planted cribwalls and brush mattresses were lower than already established values. This result makes it possible to question these few extremely high values presented in the literature. On the other hand, on brush layers and willow fascines, the study made it possible to establish new tractive stress limit values over these first three years.

On this graph, we can see that the majority of the calculations were done on structures less than five years old. Many of these data correspond to the Geni’Alp project sites already mentioned (structures built on rivers or torrents with steep slopes: 5 to 10%), hence the important tractive constraints (Evette A., Frossard P.-A. et al. 2017). 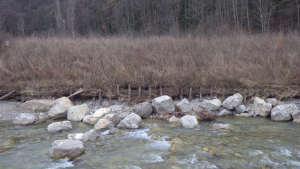 Photo of the draining of a structure constituted by a fascine protected by a riprap on the toe © Guillaume Piton.

Ideally, for sizing, it is a matter of finding a limit value at which the structure yields. In fact, this is complicated because as long as the structure resists, we can assume that it could have withstood a greater tractive constraint and if it yields, it is extremely complex to detect the reasons a posteriori. Indeed, other phenomena that the tractive stress calculation does not take into account can also be at the origin of the rupture of the structure, and in particular poor design. These include structures built on steep, high slopes and giving way due to landslides following infiltration of groundwater, or plant mortality, the structure being bypassed by the river, or emptying of the structure from underneath after scouring at the base, excavation and appearance of a cavity under the work (photo above).