The threat of cyclones frequently leads the Guadeloupe Region to carry out work to protect the banks of watercourses and gullies, in order to guarantee the safety of property and people. In the majority of cases, these constructions are made of pure or concreted riprap. Although these civil engineering techniques are well–managed and sometimes indispensable, they have a strongly negative impact on the proper functioning of riparian ecosystems (encouraging biodiversity, corridor functions, decontamination, etc.). 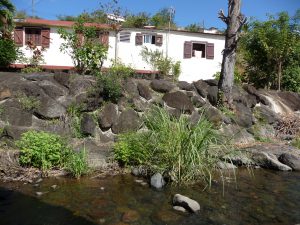 Example of civil engineering use on Beaugendre’s riverbanks in Guadeloupe. © André Evette.

In relation to civil engineering, soil biongineering represents a softer and more respectful option, from an environmental and landscape perspective, but is also generally found to be less expensive. It has proven itself, even on dynamic rivers with up to 10% slope (Géni’Alp project in the Alps).  In Europe, the historic practice of soil bioengineering has provided extensive knowledge of the natural models to be copied, and therefore of the species to be used. This is not the case in the West Indies, where the natural flora of riverine corridors has hardly been studied, and where local species are still not used extensively in the work of protecting watercourses, even though promising experiments exist.

The Guadeloupe National Park asked IRSTEA to evaluate the opportunities to use soil bioengineering techniques on Guadeloupe riverbanks and so a report was made on this issue.

The Guadeloupe National Park, in partnership with the University of the West Indies, INRA Guadeloupe, IRSTEA Grenoble, and with the financial support of the Water Board of Guadeloupe, the Guadeloupe Region, the French Agency for Biodiversity and the European Union, is developing the PROTEGER project for the promotion and development of soil bioengineering on the rivers of Guadeloupe.

This project is described in this slideshow and is divided into several phases.

Phase 1: study of riparian forests of Guadeloupe and definition of local species to be used in soil bioengineering

As soil bioengineering is a solution based on nature, in its implementation, we try to imitate natural models proven effective in fighting against erosion. The lack of knowledge of these models in Guadeloupe led the Guadeloupe National Park to launch this first phase in 2016. It was thus a question of setting up a typology of riparian forests of Guadeloupe and of extracting local species from them that are the most suited to maintaining the riverbanks. Thirty species will thus be selected. A very large amount of field work has been done with this aim by the ONF (French National Forests Office) and the BRGM (French Geological Survey); phase 1 ends in 2018. 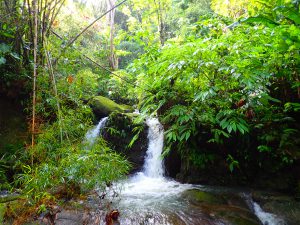 The same river, the Beaugendre, well before the previous picture. © André Evette.

Phase 2 of the project can now be launched.

For this second phase, we will begin by ensuring that the plants preselected in 2016 have the mechanical properties required for soil bioengineering. For this, these species will be cultivated in the form of seeds, seedlings or cuttings in order to know their technical characteristics of use in the constructions. This work will also help to know and control the reproductive capacities of these species and provide the technical elements necessary for their subsequent cultivation in nurseries. The results will be synthesized and popularized in species sheets. The long-term objective is in fact the development of a local socio-economic sector of plant production in order to implement the techniques of ecological engineering.

In parallel, pilot projects, initially small and then more ambitious, will be conducted in partnership with the Guadeloupe Region. These will make it possible to test under real conditions the species and techniques chosen and to make the professionals and the general public aware of the techniques available to protect riverbanks using plants.

Other countries in the West Indies and Latin America have already become interested in soil bioengineering. A study around the feedback from these different projects will consist in characterizing all of the existing techniques in tropical environments and their behaviour over time in connection with the characteristics of the medium and how they withstand erosion. A follow-up of the work done on the pilot sites over the duration will complete this study.

The setting up of a trilingual website (French, English and Spanish) dedicated to this project will make it possible to communicate on its progress. It will include feedback on the species and techniques, but also the species sheets mentioned above and the technical and scientific bibliography associated with the project.