Plants, a component that stabilizes the banks

The use of soil bioengineering techniques for protecting riverbanks has increased significantly since the end of the 20th century, but it is still largely confined to the banks of lowland rivers and is just beginning to venture onto steep rivers, or mountain streams. 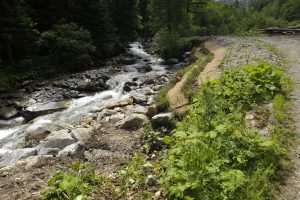 Bioengineering structure in mountain on the Bens torrent (France, Isère) with among others a cribwall. © Sébastien de Danieli.

The choice of plant techniques used to develop the banks of watercourses generally depends on expert knowledge built on experience and observation. Knowledge on the sizing of these structures, in particular regarding the hydraulic constraints they will undergo, remains very fragmentary. Unlike civil engineering practices, which rely on the exclusive use of inert materials, the design of soil bioengineering structures is not based on standard calculation rules.

An example of riprap on the Arve (Haute Savoie) © André Evette.

The use of living material is the main reason. The lack of sizing rules in soil bioengineering techniques is one of the main obstacles to their development, particularly in the context of torrents.

Soil bioengineering constructions are often less resistant just after their construction than equivalent civil engineering techniques (riprap, etc), because they are then directly exposed to floods without the plants having had time to develop their root systems (stabilization of the soil) and stems (slowing down the water, carpet effect).

Mechanical resistance increases very quickly in the early years because of tremendous root development, especially when willow is used. It has been shown that when willow cuttings were used, their underground biomass had increased as much as 20-fold and aerial biomass up to 10-fold in the second growing season.

Under good conditions, these soil biongineering structures develop and their resistance tends to increase over the years, until it reaches a maximum.

Soil bioengineering is generally less resistant than civil engineering, but it can be more resistant under certain conditions, the relative positioning of the grey and green curves on the graph therefore has no particular meaning (hence the dashes on the vertical axis). What matters is the temporal dynamics of each of the two curves.