Acquiring experience and the creation of experimental structures

In order to improve our understanding of these mechanical strength functions, IRSTEA researchers conducted an important study of experimental feedback on the alpine scale and helped to set up experimental sites to test soil bioengineering techniques under unprecedented levels of stress (mountain torrents of 5 to 10%).

As part of the Géni’Alp project, feedback on riverbank protection techniques used on mountain streams was collected to provide information and to assess their resistance. Analyzing the successes and failures of the different techniques was also done. The sites were selected mainly on the Alpine Arc, but also on other mountains, on waterways with at least 1% slopes. Thirteen sites and eighteen structures in France and Italy are presented here. All in all, these structures “succeeded”. All structures underwent a descriptive and historical analysis, topographical surveys and granulometric analysis of the bottom of the river bed.

A resulting synthesis is presented in graph form and includes, for each structure, the slope of the bed, the critical tractive stress of setting into motion (estimated for a diameter D84, a diameter such that 84% of the elements of the bed are finer, an indicator widely used by geomorphologists for gravel rivers), the technique used and the year of construction (figure below). The critical tractive stress calculated for D84 is an indicator regularly used to estimate the flow or the height of water necessary for a profound modification of the bed, a significant morphogenetic activity.

This figure shows that pure soil bioengineering techniques (without riprap at toe of riverbank) and mixed techniques (with riprap) have survived for 15 to 20 years on riverbanks with slopes greater than 1% (usually considered as torrential) and carrying large rocks. We can thus note how well a structure, carried out in 1996, has held up using pure plant techniques, on the Isère with a slope close to 2%. Likewise, brush mattresses with riprap at the base on alpine rivers with slopes of around 2% have resisted for twenty years in Italy.

As part of the same project, 6 pilot soil bioengineering projects were set up in mountain rivers. These projects helped to solve various issues that arise in this particular context. The first question was whether pure or mixed soil bioengineering techniques could withstand the mechanical stresses (tractive forces, solid transport) found in torrents with 5 to 10% slope with high banks (up to at least 10 meters), sometimes combined with the problem of clay landslides.

As natural alpine models differ from those used in the plains, it was also a question of testing how well local species established themselves, in particular alpine willows. It also took into account the particular characteristics of these watersheds, which have a period of high spring water (snow regime), a short growing season and the impossibility of intervening in winter because of the snow; all vital points to take into account when setting up these structures. 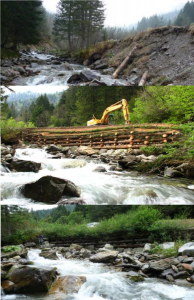 Photos of 2 bioengineering structures from Géni’Alp project before, during and after works. 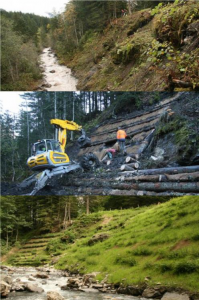 This first phase of collecting results of past experiments and development has shown  that soil bioengineering structures on alpine rivers have held up for decades and that structures built on torrents with steep sides can tolerate floods shortly after their construction, a point often of serious concern to potential users of these techniques.

Therefore, in the framework of the Resibio project and with the support of the French Agency for Biodiversity, IRSTEA researchers aimed to refine the sizing of these structures. There are two kinds of approaches to studying the resistance to mechanical stress of soil bioengineering structures:

– The first is empirical and involves the collection of observations on the good performance or destruction of structures during major floods;

– The second approach is more mechanistic and consists of specifying the physical mechanisms giving rise to the destruction of the structure.